Having looked at countries that achieved rapid reductions in stunting, the Government of Tanzania in collaboration with World Food Program (WFP) and Boston Consulting Group (BCG), have adopted BCG’s “Smart Simplicity” approach for a purpose of accelerating the implementation of the National Multisectoral Nutrition Action Plan (NMNAP 2016/17 – 2020/21) in Tanzania. This approach draws on experience from the private sector and extensive work on systems and structures that have facilitated the rapid reduction of malnutrition in several countries around the world.

To facilitate this approach, a Catalyst Team was formed, prior thorough review of the quick win models that succeeded to significantly reduce malnutrition in Senegal, Peru, Mauritania and Maharastra region in India, among others. The examination of quick win model used ‘Smart Simplicity’ management theory to identify 12 common factors that contributed to reduction of malnutrition in a big way within a fairly shorter time frame. Amongst them were the availability of timely and reliable data as well as a dedicated team (herein after referred to as Catalyst Team) with access to decision-makers and key nutrition stakeholders across various administrative structures. Among the major role of the Catalyst Team, is to facilitate creation of strong links and feedback between the national, regional and council’s levels thus enhancing empowerment of stakeholders at every level.

Rationale for the establishment

There has been various efforts underway in food and nutrition data generation as well as the use of evidence based information for nutrition programming and decision making. This marks a need for including all stakeholders with emphasis on providing decision makers with information that is relevant, reliable, timely, clear and concise on current and projected food and nutrition security conditions is critical in guiding appreciate mitigation measures to all forms of malnutrition. Relevant, reliable, timely, clear and concise nutrition information, not only provide reliable evidence on the situation but also translates that evidence into actionable knowledge for policy decisions and directives. These responses ranges from those that aim at building resilience and disaster risk reduction to those that aim at protecting livelihoods, reducing food deficit, reducing acute malnutrition and saving lives and livelihoods.

The Catalyst Team embraces on a strategic framework advocating for the effective use of harmonized livelihoods-based approach which draws information from multiple sectors, that is (just to name a few) health, agriculture, livestock and fisheries, education, water; and a wider range of multiple stakeholders: Government, National and International Agencies, Higher Learning Institutions, Regional Administration and Local Government Authorities, Development Partners, Civil Society Organizations, the Private Sector and the community. Indeed, a multisectoral approach which bring together various sectors, has proved to be a practical and effective steps towards addressing nutrition challenges basing on integrated analysis and reporting on the situation of food and nutrition insecurity, and providing strategic recommendations on interventions for a wide range of decision makers at all levels.

Therefore, the Catalyst Team was formed as a part of a comprehensive effort for accelerating scaling up of nutrition interventions in Tanzania. It is an effort coherent with the strategies set in the NMNAP, and it sediments upon its KRAs and features across all TWG. Primarily, the establishment of the team was to respond to the challenges related to inadequate generation and usage of nutrition and related data at various levels with emphases of the council level where most of data originates. The team is expected to provide guidance on customized mitigation measures in response to all forms of malnutrition using the available massive evidences. 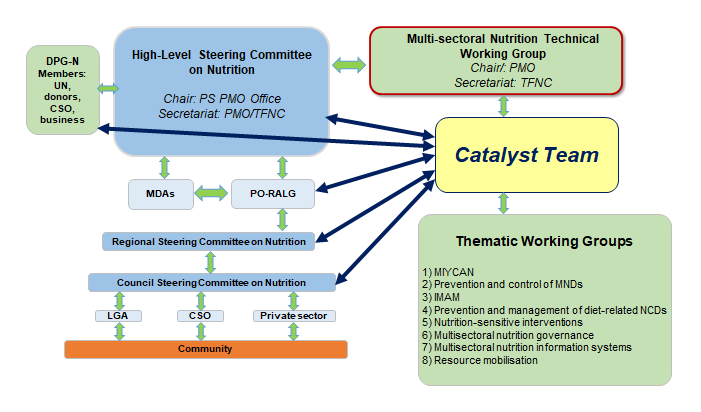 Composition of the Catalyst Team, roles and responsibilities

The Catalyst Team was launched in late November 2016 on an interim basis. The Team comprises of members from Tanzania Food and Nutrition Centre (TFNC) and the President’s Office, Regional Administration and Local Government (PO-RALG). Currently, one additional member from MSU/ASPIRES has also been attached in the team’s undertakings to expedite linkage between the group with DPG Nutrition. The team make use of Smart Simplicity Model to expedite the implementation of the NMNAP and provide evidence based information to the Multisectoral Nutrition Technical Working Group.

The team underscores the commitment to building a strong nutrition system in Tanzania through fostering alliances, networking and collaboration among stakeholders at national, regional and council levels. Roles and function of the Catalyst Team are:

2.Testing District Collaboration Model: the Catalyst Team will be working out how to foster great on-the-ground collaboration in Councils,

4.Communicate regularly on progress: regular updates from the team.

The roll-out in this nature was mainly due to expedite implementation of nutrition intervention in all area regardless partner engagement; building on multisectoral approach at the council level to harmonize sectoral efforts. But it also meant to take stock of best practices and build on a harmonized district collaboration model and learning framework which could be rolled out on a wider scope.

To date, several missions have been conducted. Three areas of operation were identified, promoted and sustained in the team’s missions: Facilitate collaboration, Manage data systems and Improved Communication. Beneficiaries of Catalyst Team’s missions have been so far Members of the Regional and Councils Nutrition Steering Committees, Regional and Council Nutrition Officers, Health Care Providers at facility levels, Members of the Legislative Councils, Regional and District Executive Officers, and the community at large. Catalyst Teams missions have been (but not exclusively limited) to the five Councils (Pangani - Tanga Region, Chamwino and Bahi (Dodoma Region) and Ikungi and Singida DC (Singida Region).